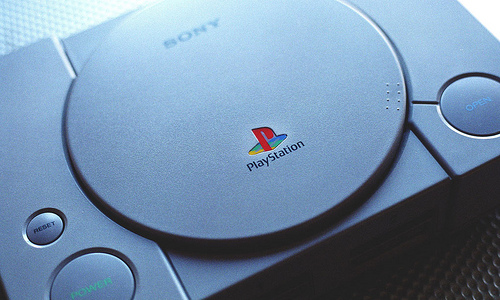 Its advertising campaign told us not to underestimate the power of Playstation, and we didn’t. In my eyes, the chunky grey console is the greatest, because EVERYONE had one.

Nowadays it’s Xbox 360 vs. the PS3 but when Sony launched its first console in the UK in 1995 it would still come up against the Nintendo 64 and Sega Dreamcast. But even if someone bought one of those, they would still have a Playstation.

My best mate was one of the first to have one and I used to beg my mum to go round his house after school for tea because I knew that we would have epic sessions on Actua Soccer or International Track and Field. I was glued to it as the graphics at the time were so superior compared to the Super Nintento I’d been used to.

Then Playstation finally entered the Rogers household when my dad decided he wanted one for his birthday. The day he opened it was a momentous day and we played on Gran Turismo all day, it wasn’t just a gift for him – it was for all of us. Playstation had crossed the boundary from games consoles being designed for children and teenagers as adults wanted to play on it too.

But the problem was that my sisters wanted to play too, and we had to share time on it. I was fortunate enough to find a £20 note lying on the floor in town one day, and even though I saw the old lady drop it I pocketed it and bought myself World Cup 98.

Unfortunately there was no change left over to buy a memory card so for months I tried to win the tournament in the hour I was given, only for one of my sisters to turn it off and all hell break loose.

Eventually I finally got my own and I’d spend countless happy hours in my room playing WWF Smackdown 2, FIFA 2000 and V Rally 2. Throw in the cheat books, demo disks and multitap gaming against your mates and the Playstation was the complete gaming experience.

Ultimately the PS2 came along and everyone moved with the times, but the Playstation had done its job. But the funny thing is now that even though PS3 has followed, I haven’t. I still love my PS2 and I love my Playstation games even more. After selling them off years ago I find myself raiding Ebay for the classics to regain the pleasures I used to have.

You can keep your online gaming, headset chatting and realistic graphics, give me a Playstation, a controller and a copy of Abe’s Odyssey and I’ll show you a good time. Just don’t forget the memory card…

Retrieved from I Miss The 90's