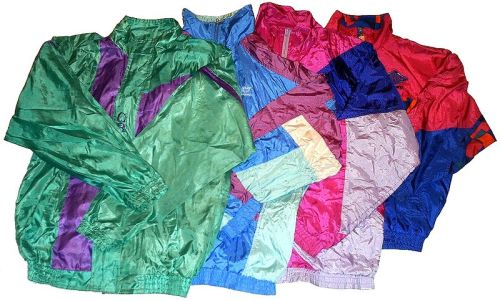 One fashion trend that surely will never return to our streets, well except in Liverpool anyway, the shell suit was a disaster from start to finish. Even its description on Wiktionary makes them sounds god-awful:

A lightweight tracksuit consisting of a matching zip-front jacket and matching elasticated trousers, each having an outer nylon shell, often bearing panels and flashes of different colours, and inner cotton lining; popular in the late 1980s and early 1990s both as sportswear and as general leisurewear.

Any trend that is pioneered by Jimmy Saville is worrying but the problematic polyester took off in the late 80s and reached their peak during the early 90s. They often featured awful colour combinations and made people look like a packet of Refreshers.

Perhaps if you were working out at the time you could get away with it but the mere fact that people used to wear them to the pub, around the house and even on nights out concerns me. There’d be no need for a lighting system in the local discothèque as people breakdanced and bodypopped in their rainbow coloured clothing.

However they were practical as they were waterproof which is a good thing, but take it to other extreme and you’ve got a problem. If exposed to hot temperatures or fire they suddenly melted and gave you no protection, especially on Bonfire Night as they attached themselves to your skin.

At least burning shell suits is one way of getting rid of them, or the other being hand them into you’re local Oxfam. Whilst you think you’re doing a good turn and helping a charity, they won’t sell them as no-one wants to be seen or even heard in them thanks to the plastic rustling like leaves as you moved around.

Welsh rappers Goldie Lookin’ Chain attempted to reintroduce the shell suit when they had a spell in the charts a few years ago and I’m sure many of the chavs that lurk in city centres would find them tasteful today. And then there are the Eastern Europeans who probably think they look amazing dressed like someone who got stuck in a wrapping paper warehouse.

But no matter how people try to recover the popularity of the tracksuit’s scabby little cousin it looks to be destined to appearing in the mean streets of Newport rather than New York for the foreseeable future.

Retrieved from I Miss The 90's