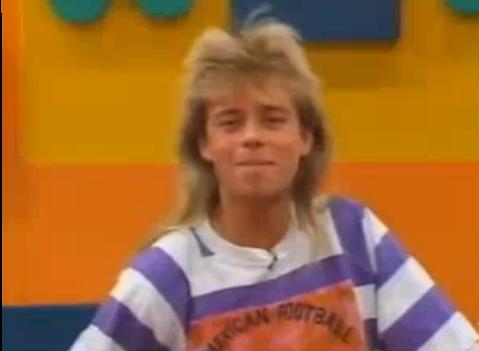 The man with the worst mullet in the history of television, Pat Sharp appeared on both our TV screens and through our ghettoblaster radios throughout the late 80s and early 90s, but it will be his career in kids entertainment that he’s best remembered for.

After beginning his career on Radio 1, Radio Mercury and Capital FM he presented “Top of the Pops” before landing the best job on telly. If anyone asked you if you wanted to present a show featuring go karts, fireworks and a pair of gorgeous twins how could you turn that down?

“Fun House” began in 1989 and ran for 10 years on CITV and as its theme tune said it was a whole lot of fun with prizes to be won, and where you had to use your body and your brain if you want to play the game, It was such a hit that up to eight million people would watch it each week.

Contestants would go through three gunge-filled challenges and answered questions to gain extra points before the Fun Kart grand-prix, where they would take it in turns to drive around the track at a ridiculously slow speed and grab ribbons. The winners would then go into the Funhouse at the end where they could win cool prizes.

I can’t remember a kid not enjoying “Fun House” and even though the cheerleader twins called Melanie and Martina seemed to be only able to count to five they were as popular as Pat himself. He still claims to this day that he never enjoyed a bit of a ménage-trios in the ball pool with them but c’mon Pat your not fooling anyone!

Sharp’s success on the show led to him presenting a Saturday morning show called “What’s Up Doc” that featured Warner Brothers cartoons such as “The Animaniacs”, as well as new bands including Take That and East 17.

After then hosting a kids quiz show titled “Hang On!” where they could actually win decent prizes such as a holiday, Sharp’s presenting days ended after “Fun House” was pulled in 1999. He returned to radio and currently works at Heart 103 in Cambridge.

He tried unsuccessfully to re-make an adult version of “Fun House” a few years ago featuring Club 18-30 style games, but it was rejected by ITV which annoys me. If smut-filled drivel like “Loose Women” can be broadcast why can’t a revamped classic? I’d much rather seen the twins still looking great in their 40s rather than some aging old slappers talking crap and struggling to get a bloke.

Pat featured on Channel 4’s “The Games” and “X Factor – Battle of the Stars” in recent years, however his place in 90s nostalgia is secured with the wackiest, zaniest kids show ever, and he certainly put the fun back into everyone’s houses right through the decade.


Retrieved from I Miss The 90's